Montana’s Bitterroot Valley runs for over 90 miles from just south of Missoula to Lost Trail Pass at the Idaho line, encompassing some of the state’s most iconic landscapes. Bordered by the Sapphire Mountains to the east and the Bitteroot Range to the west, it’s also known as Montana’s “banana belt” due to its relatively milder winters, longer growing seasons and productive soils. This photo captures the valley in early July, just before the land begins slowly shifting from green to gold to brown before winter arrives once more! 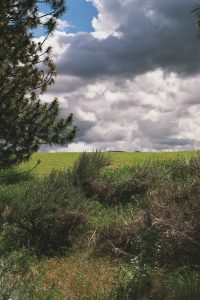