Glacier National Park and the U.S. Northern Continental Divide have long been sculpted by glaciers, wildfire, erosion and other forces of nature, as is evident in this view looking across Upper Kintla Lake toward Kintla and Harris glaciers.

In lands long considered sacred by Blackfeet, Salish and Kootenai Native American cultures, park policies and public attitudes have shifted largely toward letting natural wildfires burn, and to allowing large predators to roam and flourish again. Human caused climate change, though, has become a huge unruly force of its own, and its impacts are quite palpable here, as warming temperatures continue to shrink, diminish and in some cases obliterate the region’s remaining glaciers. 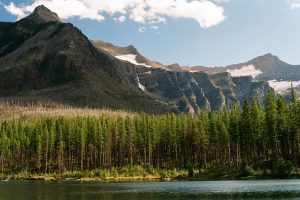