Arizona’s Grand Canyon is unsurpassed in geological scale, and it’s one of the most humbling places where you could ever spend time. I never get tired of visiting this rugged, remarkably beautiful and protected place, no matter the season, and suspect that you wouldn’t either once you’ve ventured here!

From summer lightning and thunderstorms, to autumn fog and mist, to winter snows, the light play and constantly changing colors as the weather interacts with the canyon is spell binding. The scale, and distances, are vast, the weather can change in a heartbeat, and in contrast to the South Rim, the North Rim is a higher, cooler, much less traveled part of Grand Canyon National Park.

President Theodore Roosevelt’s foresight helped to preserve this area for future generations. As he said over a century ago, “Leave it as it is. You cannot improve on it. The ages have been at work on it, and man can only mar it.” Thankfully this has largely been the case since the early 20th century, and here’s hoping that in your lifetime you’ll be able to visit the Grand Canyon’s north and south rims. 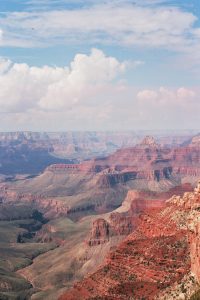